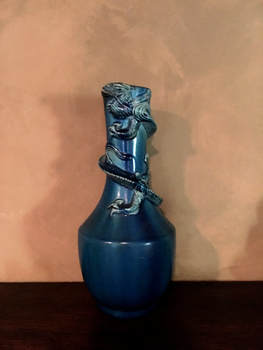 Go ahead. Cup it in your hands. Feel
its cool smooth glaze and honest heft,
the ridges some unknown potter left as he rounded
the bowl, drew in the clay, and pulled it up.

Run your fingers along the sculpted beast who coils
through ribbons of cloud around the long straight neck.
Snake shaped, winged and four footed,
with requisite frog belly and carp scales, he is a fine

Chinese dragon although, only three-toed,
he is not of the imperial species, not even noble,
but formed to please a poet or provincial scholar--
with power enough, I trust, to bring a modicum of luck,

keep the flying phoenix plates in the curio
cabinet beneath him safe from the dog and cat,
​and protect our house from typhoon and flood --
rare as dragons on these mesas.